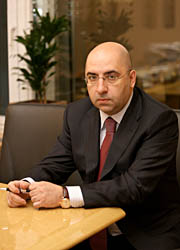 Anatoly Ballo, the CEO of Nizhnovatomenergosbyt Alexander Lagutin and the former Deputy Minister of Energy, the Former first Deputy CEO of Rosgeo Stanislav Svetlitsky, according to the newspaper Kommersant[1], are accused of attempt of plunder of $14 million at JSC Evraziysky. The stolen means, according to the investigators — a part of the credit issued by the State Bank in 2008 on upgrade of a water supply system in Rostov-on-Don which is conducted within the comprehensive program of construction and reconstruction of subjects to water supply of the region. From the State Bank this investment program is supervised by mister Ballo who, according to the investigation, in the spring of 2008, having entered into collusion with accomplices, developed the plan directed to embezzlement of Eurasian. Let's note that mister Lagutin is a board member of Eurasian, and mister Svetlitsky — the chairman of the board of directors, and before the appointment in the ministry was the CEO of the company.

According to the investigation, suspects developed the special scheme of which they participated, according to detectives, and "other persons" for plunder of borrowing facilities. The last, foreknowing that Vnesheconombank will grant to Eurasian the loan for purchase of the Rostov Yugvodokanal LLC, issued the transaction on sale of shares of Ltd company then a certain offshore company became "the actual owner of the company", as stated in case papers. Detectives consider that it is under control of the banker and his accomplices (the company name does not call the investigation). After that the CEO of Eurasian applied to Vnesheconombank for the loan, having suppressed the fact of change of owners of Ltd company, changes in the list of participants of Yugvodokanal LLC were also not registered. Vnesheconombank on behalf of which mister Ballo acted issued $75 million as the credit. Shares of Yugvodokanal LLC were purchased at offshore firm, but soon the agreement was terminated. However JSC Evraziysky was retued to only $61 million, and $14 million, according to the investigation, remained on accounts of an offshore company.

Criminal case conceing the banker and his accomplices is initiated on March 1 upon large scale fraud (Part 4 of Article 159 of the Criminal Code of the Russian Federation), last Saturday Tverskoy district court of Moscow considered petitions of the investigation for election of a measure of restraint to Anatoly Ballo, Alexander Lagutin and Stanislav Svetlitsky. To the banker the investigation suggested to choose house arrest, and to two other persons involved — detention. But as a result the court refused arrest of businessmen from whom recognizance not to leave was as a result taken, and conceing Anatoly Ballo the measure of restraint in the form of pledge in the amount of 5 million rubles was chosen. Bail term into the deposit account of court — on March 6. Today the district court will consider a measure of restraint to the banker again.

In Vnesheconombank where for three days refused flatly to comment on a situation, confirmed yesterday that within investigation in bank "investigative actions" were carried out, and the necessary assistance in conducting investigation appears bank. Lawyers of misters Svetlitsky and Lagutin refused comments. Did not begin to comment on investigation also in Eurasian, without having responded edition to the written request. Yesterday for all day of Kommersant assured of Nizhnovatomenergosbyta that the CEO "is at a meeting and it is impossible to contact it".