"He provoked a conflict and fired eight shots." - Russian Criminal

The Investigative Committee of Russia (TFR) today plans to bring charges in the final version to the ex-governor of the Khabarovsk Territory Sergey Furgal and other defendants in the case, including Andrei Paley, Marat Kadyrov, Alexander Karepov. The investigation considers Paley to be the perpetrator of two murders, Kadyrov to be the perpetrator of the assassination attempt, Karepov as the organizer, and Furgal as the organizer and customer. Everyone denies guilt, despite persuasion. Furgal’s business partner Nikolai Mistryukov, who was diagnosed with cancer in the isolation ward, and who almost lost his sight, is cooperating and has made a deal with the investigation. He needed urgent operations. It was after Mistryukov’s testimony that Furgal was arrested. And the rest of the defendants in the case ended up in jail after the testimony of a secret witness. The first to name his name was the telegram channel VChK-OGPU. This is a former employee of the Internal Affairs Directorate of the Khabarovsk Territory Vladimir Pershin. He is now under state protection. Pershin himself expressed his desire to testify while in prison on charges of extortion from Gennady Kapilevich, the head of the village of Mirnoye. His revelations remained in limbo for a long time until the FSB of the Russian Federation became interested in them. After a detailed interrogation, Pershin’s name and surname were classified in the materials, he was taken under protection. And the materials themselves about two murders and one attempt on life committed in the mid-2000s and in which Furgal was involved were immediately taken into their production by the TFR. Following were arrested Andrei Paley, Marat Kadyrov, Alexander Karepov, Nikolai Mistryukov, named by Pershin during interrogation. Rucriminal.info has at its disposal some materials on the "Furgal case" with the initial plot of the accusation. Later, the surname Furgala was added there instead of “an unidentified person from among the leading employees of LLC Mif-Khabarovsk”. We are waiting for what will come up with a new one in the charge of January 15, but sources say that the original plot will hardly change. So far, in several parts, we present the documents that we have. “In the course of the investigation of this criminal case, sufficient evidence has been collected to charge Andrey Vadimovich Karepov with incitement to attempted murder, that is, persuading another person to commit actions aimed at deliberately causing the death of Alexander Vladimirovich Smolsky, which was not brought to the end due to circumstances beyond his control, by means of persuasion and bribery, in relation to a person in connection with the performance of his official activities, by a group of persons by prior conspiracy, in a generally dangerous way, for hire, under the following circumstances:


Mistryukov N.V., being one of the heads of LLC "Mif-Khabarovsk", engaged in the reception and sale of ferrous scrap in the Far Eastern Federal District of the Russian Federation, knowing in advance that Smolsky A.V. on the territory of the village. Progress of the Amur Region carries out a similar entrepreneurial activity, extracting from this a significant monetary income, out of mercenary motives, guided by the principles of unfair competition, in the summer of 2004, the exact time and place of the investigation has not been established, entered into an agreement with unidentified persons from among the leading mines of LLC Mif- Khabarovsk "(here the surname Furga was later added, that Mistryukov-Red entered into an agreement with him), aimed at depriving AV Smolsky of life, whose official activities to establish definitely underestimated the value of accepting scrap of ferrous metals, contradicted their personal and official interests.


In order to realize the criminal intent, Mistryukov N.V., who assumed the duties of one of the organizers of the murder, in the summer, but not later than July 28, 2004, the exact date was not established by the investigation, in an unidentified place by the investigation, together with unidentified persons, from among leading employees of LLC "Mif-Khabarovsk" (this is about Furgala-Ed.), offered his friend AB Karepov. to find persons who are ready to commit this crime for a monetary reward, that is, for hire.


Having accepted the offer of N.V. Mistryukova and unidentified persons from among the employees of LLC "Mif-Khabarovsk", Karepov AV to participate in the murder, at an unknown time and place, during a personal meeting with Kadyrov M.F., with whom he had a trusting relationship, will invite him to take part in committing the murder of Smolsky as an executor for a monetary reward, that is, for hire.


He, having previously committed incitement in the attempted murder of A.V. Smolsky, committed incitement to murder, that is, persuading a person to commit actions directly aimed at intentionally inflicting death on another person, by means of persuasion and bribery, committed against two persons, in connection with the exercise by this person of official activities, by a group of persons by prior conspiracy, for hire, under the following circumstances: Zorya Evgeny Alekseevich, ... birth, being a citizen of the Russian Federation and exercising entrepreneurial activity in the sphere of retail and wholesale trade on the territory of the city of Khabarovsk, concluded purchase and sale agreements: No. 12 dated July 29, 2002 with the bankruptcy manager of JSC “Zavod zhBI 2” Bogdanov I.The. on the acquisition of the main production building under the letter "U", with a total area of ​​15930, 5 sq. m. and No. 16 of August 12, 2003 with the acting general director of OOO PPP "SUGDAK" Svarov V.N. on the purchase of railway track No. 6, in accordance with which the specified objects located on the territory of the former plant "concrete goods 2", at the address: Khabarovsk, st. Construction, 24, passed into his ownership.


Unidentified persons from among the executive employees of LLC "Mif-Khabarovsk" (this is again about Furgal-Ed.), Wishing to use in the implementation of their production goals in the field of acceptance and sale of scrap ferrous metals, railway track No. 6, located on the territory of the former plant "ZHBI -2 ", during the negotiations offered Zora E.A. sharing the specified railroad track for a monetary reward.


The commercial offer for the joint use of railway track 6 contradicted the personal and professional interests of E.A. Zori. and were rejected by the latter, due to the disadvantage and inexpediency.


Failing to achieve the desired result in negotiations with E.A. Zorey, unidentified persons from among the leading employees of LLC "Mif-Khabarovsk" wishing to hinder the entrepreneurial activities of E.A. Zori. and thereby induce the latter to share the specified railway track 6, at an unspecified time place, initiated the conclusion (signing) "retroactively" -24 June 2002 with the bankruptcy trustee of JSC "Zavod ZHBI 2" Bogdanov I.The. a fictitious contract of purchase and sale of a part (154/1000 shares) of the main production building under the letter "U", with a total area of​​15930, 5 ka. and, located on the territory of the former plant "concrete goods 2", at the address: Khabarovsk, st. Stroitelnaya, d. 24, after which they declared ownership of this part of the production premises of the above-mentioned building of the ZHBI-2 plant by filing statements of claim with the arbitration court of the Khabarovsk Territory.


Then, unidentified persons from among the leading employees of LLC Mif-Khabarovsk ", having reliable information about the upcoming decision of the arbitration court, will not be in their favor due to the lack of legal grounds, from selfish motives, guided by the principles of unfair competition, no later than October 28, 2004 years (the exact time and place was not established by the investigation) entered into a criminal conspiracy with each other, aimed at depriving E.A. Zori’s life, whose refusal to share these railway sidings contradicted their personal and professional interests.


In order to realize the criminal intent, unidentified persons from among the leading employees of LLC Mif-Khabarovsk (and again this is about Furgal-Ed.), Who took on the responsibilities of organizers of the murder, at an unspecified time, but not later than October 28, 2004, the exact date the investigation has not established, in an unidentified place by the investigation, they offered their friend A.V. Karepov. to find persons ready for a monetary reward of at least 40,000 US dollars, which at the rate of the Bank of Russia left at least 1,150,696 rubles, that is, for hire, to commit this crime.


Accepting the proposal of unidentified persons from among the leading employees of LLC "Mif-Khabarovsk", Karepov A.The. to participate in the murder, at an unknown time and place, during a personal meeting with A.S. Paley, with whom he had a trusting relationship, invited him to take part in the murder of E.A. Zori. as a performer, for a monetary reward, that is, by the border. Counting on monetary reward, realizing the social danger of his actions, anticipating and wishing the onset of socially dangerous consequences in the form of depriving a person of the inalienable right to life, protected by law, A.S. Paley. agreed to take part in the murder of Zori E.A. for hire as a performer. Thereby Karepov A.The. by persuasion and bribery, persuaded Paley A.S. to commit murder Zori E.A. 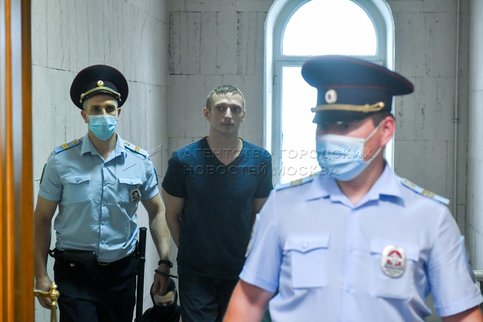 In the performance of a single criminal intent aimed at killing Zori E.A., Paley A.S., acting for hire, having information about the daily routine, place of residence and route of movement of Zori E.A., no later than 22 hours on October 28, 2004, armed with firearms that were previously illegally acquired at an unspecified time and place — a Makarov pistol suitable for shooting (IIM, serial number ET-5112, produced in 1981, caliber 9 mm and at least eight cartridges suitable for firing to it, arrived at the house 16 on Serysheva Street, Khabarovsk, not far from the place where Zorya E.A. parked his car.


In the period between 22 hours 00 minutes and 23 hours 30 minutes of the same day, Paley A.S. being near the house 16 on the street. Seryshev, Khabarovsk, when Zori E.A. appeared, in order to conceal the ordered nature of the crime, initiating conflict with the victim, during which, realizing the social danger of his actions, anticipating and wishing the onset of socially dangerous consequences, acting before hiring, deliberately fired at the victim from a close distance, aiming at least eight shots from a pistol in the area of the location of vital organs.